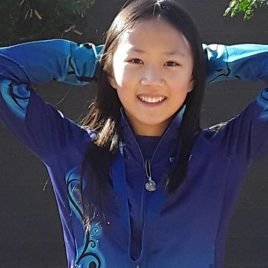 Amy Gao is attending her first year at Campus Middle School as a sixth grader. She is passionate about learning language arts, math, and science. She is also started to learn Spanish and is still learning Chinese, a language she has started learning since she was very young. In fact, she also started writing essays in Chinese about three years ago and won second place at the Seventh Annual U.S. Chinese Essay Contest for Youth in 2018. Outside of school, she is quite interested in art and synchronized swimming, devoting most of her free time toward these activities.

Amy supports the goal Youth Creates has for future generations, to positively impact young lives by helping children and young adults share their talents with the world. Therefore, she is eager to share her passion for learning, specifically for writing stories, with others. Amy also strongly agrees with what Jane Goodall, a well-known primatologist, had said, “You cannot get through a single day without having an impact on the world around you. What you do makes a difference, and you have to decide what kind of difference you want to make.” 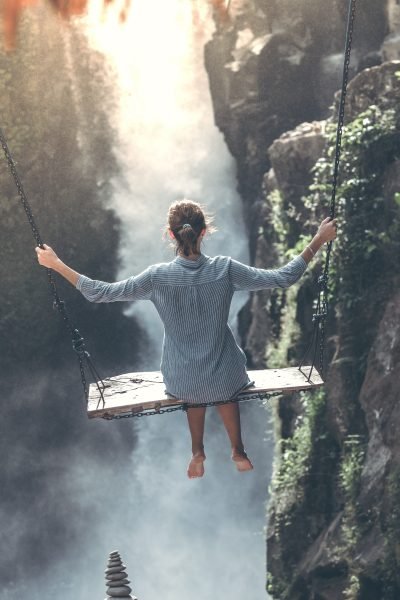 The frost deliberately bites my fingers, crawling up my arms and to my neck. Harsh winds blow me off balance as I trudge through the thick, white blanket covering the land as I head into my cozy house. As I throw off my shoes and sit down by the fire, my only hope now is to think of a life experience that can thaw me–from the inside out.

Closing my eyes, a memory sparks in my mind. Then, like a fire spreading through an entire forest of dead trees and brush, the feeling of warmth rushes through me, tugging me back in time to when my family traveled to the resort Atlantis, located in the Bahamas.

During the fall break of 2017, my family of five flew to Atlantis, a large and lush resort which also includes Aquaventure, a water park including one-hundred-forty-eight acres of water rides and pools. Aquaventure looks like a gargantuan amusement park, crawling with millions of ant-like figures. Even on the first day we arrived, my entire family dived into an exceptional adventure, accelerating through each and every ride Aquaventure had in store for us-literally.

Since Aquaventure was the largest waterpark in the Caribbean, there were many options for activities to choose from. Our first activity was the Serpent Slide. It was supposedly a slide in which guests travel on a tube through a Mayan Temple’s core. I was never fond of slides, roller coasters, or even Ferris wheels, but my family urged me on. I walked with trembling, worm-like legs up the long flight of stairs, twisting and turning like a snake’s body as I dared not to look down. When we reached the top, I was surprised to find the entrance of the slide made of an eight-foot flat surface and then a steep-looking drop into complete darkness. Without warning, I plunged–or got swallowed–into the darkness, completely snatching my breath away.

My eyes were closed tightly shut, hands gripping the tube for dear life.

What happened after only came in flashes. Other bodies were heard bumping on the tubes moving swiftly down the slide. Water was splashing and dripping nonstop, parents yelling, kids crying, laughter and screams seemingly only coming from my mouth.

Then, out of the blue, splash! The spiraling ride ended with a leisurely pass. After another couple of seconds, I slowly opened my eyes, surprised by what wonders awaited me. As I squinted at my surroundings, I saw that the slide became a clear, transparent tunnel submerged in what seemed like a shark-filled lagoon. All I felt was a cool wave of calm wash over me, causing my clenched fists to loosen, my legs and arms to relax, becoming a lot more like jello than like limbs. The worst part over, the best part had come. I smiled and chuckled to myself, thinking, what a ride that was…what a ride that was. 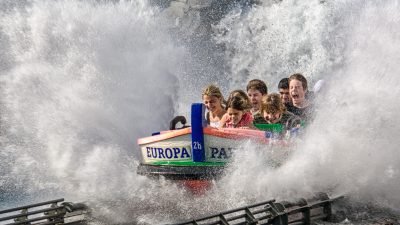 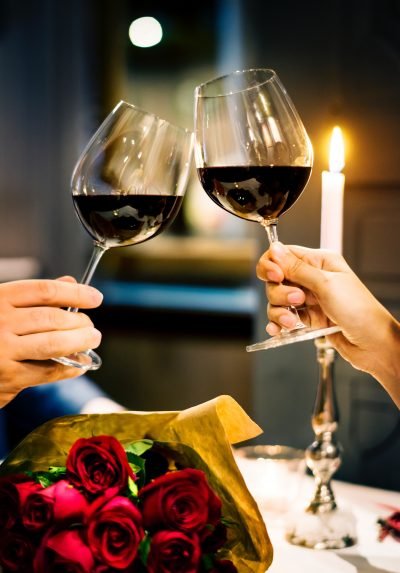 Later that night, after everyone was all dressed up in his or her exquisitely designed dresses or their formal, yet stiff suits, our family and my parents’ friends headed down from the hotels, The Cove, The Reef, and The Royal, to a fancy five-star restaurant for a gourmet dinner.

The second we entered the restaurant, I immediately felt as if I was a royal entering her magnificent palace. In front of me, a long, marble hallway was covered with a red, velvet carpet, centered in the middle of the hallway. It was ten feet wide, leaving two feet of marble floor visible on either side. On these visible platforms, every ten feet or so, a short, chestnut-colored table stood with a vivid colored vase displaying a bouquet of fragrant gardenias on top. Hanging elegantly above our heads was a gold-covered chandelier with glistening one-inch by one-inch crystals hanging on each and every branch of the chandelier. On either side of me, two maroon colored curtains were pulled aside from the other, held by a gold clip, holding the curtains midway from the ceiling and the floor, creating a twenty-foot tall entrance. A waitress then welcomed us with a warm smile, then lead us to our seats, located in the ballroom to our left. She then filled up our glasses with juice–or wine for the parents–and left us to a grand buffet displayed behind us, separated by a wall of glass and glass doors.

My favorite dish of the night was grilled lamb chops with a mashed potato side. The lamb chops were still warm and sizzling with oil, tasting salty and crisp on the outside. When I took a bite, even though I heard a soft “crunch”, in the inside, it was still soft and juicy. The innermost part of the lamb was even light pink. The result of each bite was the scrumptious flavor that melted in my mouth, forcing me to stuff my face full of it–even though it wasn’t very…what my mother would say, “ladylike”. Likewise, the pleasant taste of the mashed potatoes just topped off my experience at the restaurant. The mashed potatoes were fluffy and creamy, a heavenly taste perfected with a dash of salt and pepper. Even when the food was just displayed for the customers, the mashed potatoes had the words, “Eat Me!” all over them.

Back to the present day, 2018, my heart, mind, and body were all thawed from the ice freezing them. By then, the flaming fire was no longer burning, with only the remains of burnt, cracked coals, still steaming from their tops. I stood up, walked to the window, and realized that night had already taken over, the sun no longer able to hold onto the tips of the trees. Like a silver oyster, the moon floated among the shimmering stars. Smiling, the feeling of contentment that was brought to me from my recollection of Atlantis will be with me forever, only now accompanied by a nostalgic feeling. It was not only a wanting to go back to Atlantis but also a wanting to go back to the waiting arms of Summer.