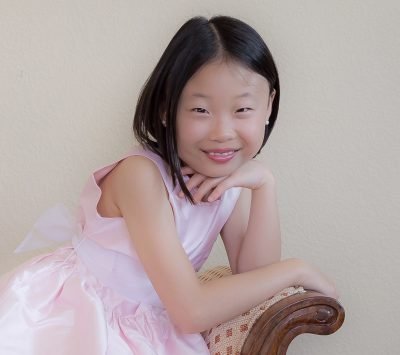 Madison Suh has been studying piano since the age of 4 with Jasmine Steadman Piano Studio.  In addition to her studies with her principal teacher Jasmine Steadman, Madison is also being instructed by Larry Graham, formally a professor of piano at the University of Colorado
Madison has participated in numerous recitals and competition in Colorado including being one of the youngest 1st place winner in the ACD Division II of Schmitt Music 2016 Competition, 2nd Place at the CSMTA Rising Star Competition, 2nd Place at the CSMTA Concerto Competition, 1st place at the ACD Division I of Schmitt  Music 2015 Competition and  1st place at the Kawai Piano Competition in 2014.  Madison was also the featured pianist with the National Repertory Orchestra in 2015 and 2016 during their summer concert series as well as being the featured pianist with Littleton Symphony Orchestra in Nov of 2014.   Madison was awarded a place as the youngest among the 12 Young Musician’s Foundation scholarship winners and roster member for the 2017-2018 as well as being awarded Olga Kern’s Aspiration Foundation Young Musician’s certificate of recognition for outstanding performance.  In addition to her many competitive accomplishments, Madison has also participated in masterclasses with renowned piano artist such as Stephanie Cheng, Justin Krawitz, and Olga Kern.
Recently, Madison was the semi-finalist at the Kaufman Center International Youth Piano Competition in New York in 2017, Gold Medalist at the International Keyboard Odyssiad & Festival Competition in Fort Collins in 2017, Steinway Concerto Competition winner in 2017, 3rd place Classic Piano Yamaha Competition in 2018 as well as winning the Junior Division (age 11-14) Colorado State MTNA(Music Teachers National Association) Competition.  In winning the MTNA State competition here in Colorado, Madison Suh will represent Colorado in the Divisional MTNA Competition in December of 2018.
Madison has a deep passion for music and dreams to be a concert pianist one day.  Madison enjoys all genres and periods of music but especially enjoys composers Frederic Chopin, Robert Schumann, and Edward Grieg.  Some of her favorite pianists are Olga Kern, Yeol Eum Son, Umi Garrett, and John Nauman.
Madison Suh is currently 12 years old and is the oldest of two siblings. In addition to piano, Madison enjoys playing golf, tennis, movies and playing the drums with her rock band.  Madison is currently in 7th grade attending STEM School & Academy in Highlands Ranch, Colorado.

Madison Suh: JYNKX – For Whom the Bell Tolls